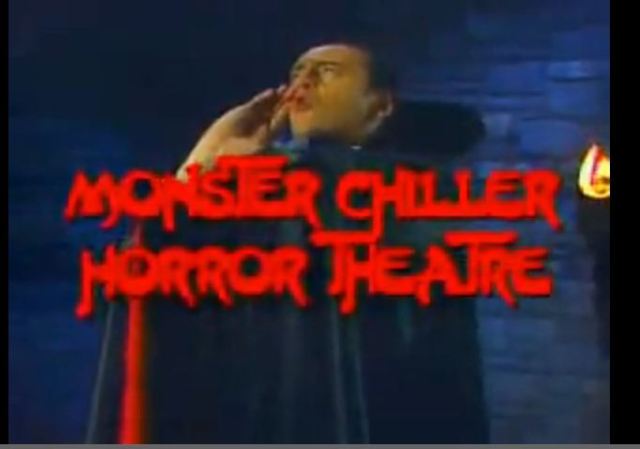 This year, like every year, it’s on the calendar, Halloween. October 31.  Each year, I plan my own little Halloween Horror Film Festival. Now less than a week away,  I haven’t even started. Ach!

Usually, I create a list of films to watch and play my own version of Count Floyd (pictured above, aka SCTV’s Joe Flaherty) with a rotation of horror. I never get around to all of the films I pick out, but it is a plan. So far, in the last two months the only movies I’ve watched that would even qualify for Halloween are Joe Dante’s subversive masterpieces Gremlins (1984) & Gremlins 2, The New Batch (1990) ; Terry Gilliam’s rather disappointing The Brothers Grimm (2005) and  Tim Burton’s Sleepy Hollow (1999.)  I could add in last years’ Cowboys & Aliens, that I finally got around to watching not long ago, but it was such a disappointing, I wouldn’t call it mess, but just a mediocrity, that I can’t include it.  As disappointing as The Brothers Grimm is, I much rather watch it again.

So, in the next week I must pack in a month’s worth of horror. The usual suspects include: the Universal and Hammer horror classics, Sam Raimi’s “Evil Dead Trilogy” and Drag Me to Hell, John Carpenter’s Halloween, Robert Rodriguez’s From Dusk to Dawn and maybe Coppola’s Bram Stoker’s Dracula and then of course Murnau’s Nosferatu. There’s Robert Wise’s The Haunting, John Hough’s The Haunting of Hell House, George Romero’s “Zombie” flicks and Roger Corman’s Poe adaptations. Good grief. There are a whole lot more. I don’t know what I will watch.

The one movie I am sure to watch in the next few days is Edgar Wright’s Shaun of the Dead. I have watched Shaun at Halloween, for the last several years. This year will be no different. A personal favorite, I just love it. It has become something of a touchstone.

So, be sure to revisit some old friends–just for the fun, or fright, of it.

I am a denizen of a small blue-green rock, spinning around, hurtling through space. I live with my wife Karen and Noire, a golden-eyed female black cat. I am outnumbered. I watch movies, meditate, listen to music, read, and contemplate whatever. I have never had an original thought in my head, but I am still on the outlook for one. That I even exist, is a small wonder. Peace and love to all. (Even those I disagree with.) So it goes. Namaste.